20 years into a centennial goal, software consultancy poised for expansion 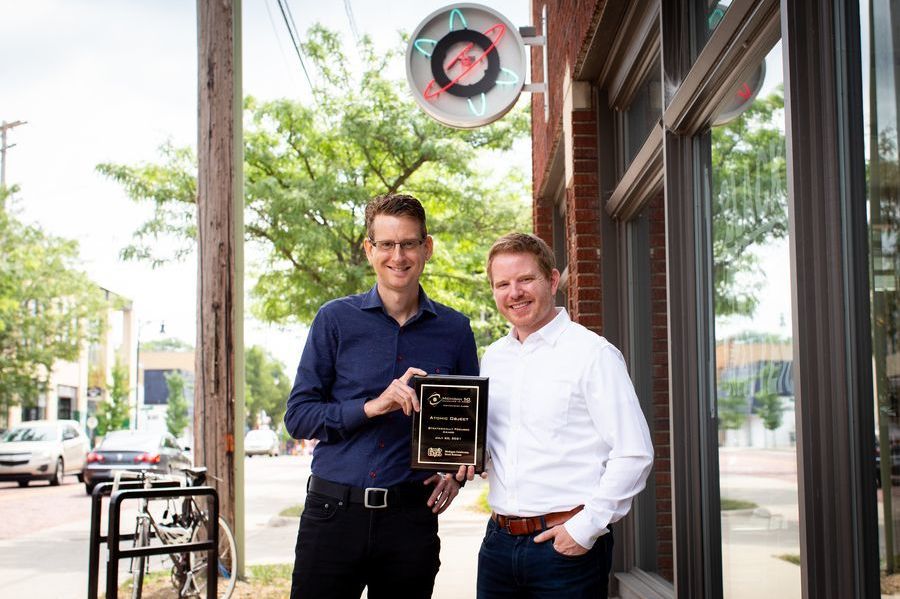 The award comes as Atomic celebrates 20 years in business. That's one-fifth of the way to Founder & Chairman Carl Erickson’s goal of building a 100-year-old company.

Since its 2001 founding in Grand Rapids, Atomic Object has expanded into Ann Arbor, built more than 200 software applications, grown to 80 employees, and been recognized by Forbes as one of the top 25 small businesses. In another milestone, Erickson appointed longtime Atoms Mike Marsiglia and Shawn Crowley as his co-CEO successors.

Jennifer Deamud chairs the MCSB board of directors. She says the selection committee sought companies that have been strategic about how they’ve chosen to grow revenue.

“We’re looking for companies who are looking outside their box of complacency,” she said. “Are they expanding beyond the state? Beyond the country?”

This year, Atomic is opening its first out-of-state office in Chicago.

“Launching new offices allows us to maintain our flat management structure. It helps us serve local customers by engaging in creative, collaborative work right alongside them,” said Crowley. “It also provides growth opportunities for Atoms.”

Marsiglia says this expansion is only possible through a people-first approach to business.

“Treating people well has been the long-term strategy that allowed us to innovate and serve our customers,” said Marsiglia. “Without this approach and investment in growing future leaders, we wouldn’t be able to move folks out to Chicago or attract top talent in a tight market.”

That commitment to employees was crucial in a year that tested everyone. During the tumult of 2020, the employee-owned company maintained jobs and salaries for all employees. The firm also kept its status as a certified B Corp, something Deamud says impressed the selection committee.

“That says a lot about the leadership of the company. B Corp Certification proves they know the importance of focusing on our environment, focusing on employees—and that ultimately leads to strategic growth,” she said. “This is definitely a company I’d want to work for if I were in the computer science field.”